Sean Kipp Rabbitt, my father, passed away last night.  The general cause of death was being old and sick; he had a quad bypass, a lung removed, a stint in his heart, and the cancer that came back was being treated.  He got up from his chair at home and fell dead on the floor in front of my mother and didn’t get up again. He was 75 years old.

To borrow an analogy from Mr. Douglas Adams, our family is religious much in the same way a brick hovers in the air.  There will be no service, no burial, no pomp and circumstance, so this is my way of eulogizing the man, a self-serving bit of pride for my father and a self-reflection on who I have become because of him.  I loved him, and he was one of the good guys.

I think one of the best ways to describe him would be a story of his days as an engineer.  The accuracy of this story is questionable, but the co-conspirators, if also still around and kicking, would agree to the tone if not the exact substance of this story.

Dad worked for a company named Amperex Electronic Corporation, a company lost now to the progress of technology.  Amperex made vacuum and imaging tubes used in studio video cameras, giant hulking pieces of electronics on enormous casters, pulled around the television studio by giant, hulking men wearing giant, hulking headsets, taking instructions from a team of engineers in a control room surrounded by cathode ray tube television sets and giant, hulking electric control boards to create the entertainment you got in your living room.  Dad was a sales engineer for their successful Plumbicon imaging tubes — red, green, blue — three each for the giant, hulking cameras.  He sold to all the studios and all of the three (and at the time, only three) networks: ABC, NBC, and CBS.

If you pull out your iPhone and look at the back of it, you’re going to see where this story of video cameras is eventually going.

In the 80s, the move was well on the way for giant, hulking studio cameras to be replaced by smaller, portable CCD imaging cameras, and the big player in that market was Ikegami.  The quality was definitely not what you have for imaging today.  Cameras were still in low definition compared to your 80-inch 4K HD TV hanging on the wall of your living room, and when you used a CCD camera to record a fast-moving object like a football, the image streaked across the screen with a blur, the imaging chips unable to keep up with the speed of the motion.

Near the end of the reign of the Plumbicon cameras, one of the last holdouts from switching over was the sports division of ABC.  They had Monday Night Football, and the quality of the tube cameras was superior to the Ikegami competition.  But the writing was on the wall: CCDs were getting better, and it was cheaper, so the ABC team of engineers, and my father with whom he was friends with for over 20 years prior, knew what was inevitable.  This did not stop them from screwing with the newcomers, however…

My father, his boss, the sales team from Ikegami, and the ABC engineers and pencil pushers were pulled into a meeting in NYC.  Put up or shut up.  ABC was deciding what they were going to do.  Ikegami did its presentation showing of the latest equipment: lighter, cheaper to maintain, superior quality for imaging, saving ABC Sports zillions of dollars, etc.  The usual pitch.

Then came my father’s turn.  Unbeknownst to his boss, he reached down and opened his briefcase, pulling out a tube.  “We have a new product that can save you from having to replace all of your cameras yet give you the reliability of the CCD imaging.  We call it the Chippacon.”  Quickly he produced a standard Plubmicon tube, a hand-built vacuum tube about five inches long with a carefully crafted analog imaging sensor at the end lovingly adorned with a memory chip he pulled from one of our old IBM PC computers and hot glued to the business end of the tube.  He turned to the lead engineer of ABC and showed it to him, hiding it from the now suddenly pale faced and shocked team of Ikegami sales people.

The ABC engineer took it and cupped it in his hands like a precious object, hiding the top of the tube and its analog to digital hot glue converter and appraised it approvingly.  “Oh, this will be perfect!  And we don’t need to do any modifications to our fleet of existing equipment?”  Straight faced, he started passing it down the table to the other ABC engineers as the Ikegami team scrambled to attempt to see this miracle of technology.  “Correct,” said my father, “it is a perfect plug and play replacement.  We’re seeing replacement life in the 10,000 hour range in our tests in house.”

The ABC pencil pusher had absolutely no idea what was going on when the lead engineer said, “Gentlemen, this changes everything.  Let’s adjourn and we’ll let you know.”  The engineers passed the tube back down their side of the table, and my father put it back in the suitcase and locked it.  The Amperex and ABC team stood and walked out of the room, chatting up my father about this “new technology” leaving the Ikegami team stunned and unable to respond.

Did ABC end up buying Ikegami cameras?  Of course.  But that wasn’t going to stop a group of engineers from screwing with a bunch of upstarts who didn’t know any better when presented with obvious BS.

Is there a moral to this story or a great takeaway as a son having experienced him telling this story?  Nope.  But I think it summed up my father’s life philosophy: none of us are getting out of this alive, so have fun while you’re doing it.

I’ve grown up well into being middle aged, and I’m a sales engineer myself now.  For my new coworkers, be forewarned that the apple doesn’t fall far from the comedy tree, but at least we’ll all have a great show.  I’ve got Kipp to blame for that.

Thanks, Dad. I’m going to miss you.

Apple has the tools to solve this, folks. Use Parental Controls and Family Sharing. Apple even offers classes on it – hit apple.com/today.

And if you’re extra paranoid, call an ACN in your area for help to supervise your kid’s device and toss Jamf Now on it.

At that point you may want to consider NOT giving your kid a device… no matter what they say, if you can’t trust your kids, they don’t NEED an iPhone.

I’m not surprised by the fear over bad batteries; it’s our own fault for poor engineering and consumer acceptance of a lack of UL certification. I actually picked the Away Travel bag specifically for the removable battery. http://fbuy.me/iVRGy

And for the “smart” part, I picked a simple Tile. http://ssqt.co/medN4d4

So far it’s worked pretty well; the Tile has let me know my bags are on board almost at the same time my Delta app has notified me they’re loaded

Is it a day ending in “y”? Then it must be time for a brand new enormous company to announce they’ve been compromised!  This time it’s our friends at Twitter saying their programming mistake managed to copy your password in plain text into their log files.

If you aren’t putting a unique password on every site, now is the time.  It’s easy with Apple devices.  Simply go to Safari -> Settings -> Autofill

Make sure User names and passwords is checked.  Now, when you visit a website, Safari will offer to save the password.  Here’s the best part.  Go change your dang’ed password!  Safari will offer a random password for that site AND remember it for you.

Sync that Stuff with iCloud! 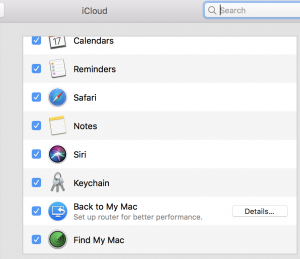 If you’re a Mac user, you’re in luck with iCloud.  Go to  -> System Preferences -> iCloud.  Turn on Keychain.  This secure, encrypted password will now sync automagically to your macOS and iOS devices.  No more fat fingers with passwords on your iPhone, my friends.